Buzz Aldrin, the American engineer and former astronaut, and the second person to walk on the Moon will signing copies of No Dream Is Too High: Life Lessons From a Man Who Walked on the Moon.

He was the Lunar Module Pilot on Apollo 11, the first manned lunar landing in history. He set foot on the Moon at 03:15:16 on July 21, 1969 (UTC), following mission commander Neil Armstrong. He is a former U.S. Air Force officer and a Command Pilot.

Search catalog for other signed books by Buzz Aldrin

Please make sure to contact the bookstore for any special instructions for this event. If are not able to attend the event, you can also ask them if they can save you a signed copy.

Beloved American hero and Astronaut Buzz Aldrin will be at Book Revue to speak about and sign his new book, No Dream is Too High: Life Lessons From a Man Who Walked on the Moon.

Beloved American hero Buzz Aldrin reflects on the wisdom, guiding principles, and irreverent anecdotes he’s gathered through his event-filled life—both in outer space and on earth—in this inspiring guide-to-life for the next generation.

Everywhere he goes, crowds gather to meet Buzz Aldrin. He is a world-class hero, a larger-than-life figurehead, best known of a generation of astronauts whose achievements surged in just a few years from first man in space to first men on the moon. Now he pauses to reflect and share what he has learned, from the vantage point not only of outer space but also of time: still a non-stop traveler and impassioned advocate for space exploration, Aldrin will be 86 in 2016. 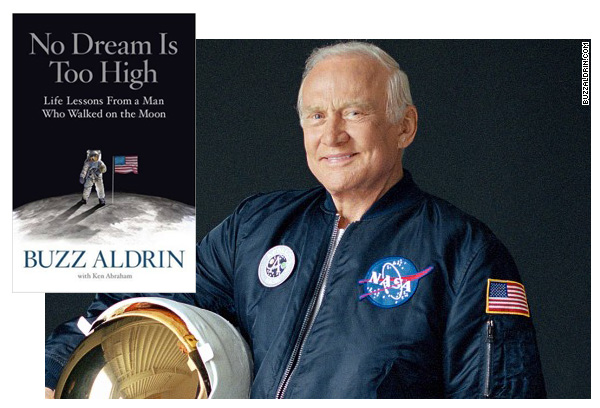 No Dream Is Too High whittles down Buzz Aldrin’s event-filled life into a short list of principles he values, each illustrated by fascinating anecdotes and memories, such as:
· Second comes right after first. NASA protocol should have meant he was first on the moon, but rules changed just before the mission. How he learned to be proud of being the second man on the moon.
· Look for opportunities, not obstacles. Buzz was rejected the first time he applied to be an astronaut. Failure is an opportunity to learn to do better.
· Always maintain your spirit of adventure. For his 80th birthday, Buzz went diving in the Galapagos and hitched a ride on a whale shark. He stays fit, energetic, and fascinated with life.

No Dream Is Too High is a beautiful memento, a thought-provoking set of ideas, and a new opportunity for Buzz Aldrin to connect with the masses of people who recognize his unique place in human history.

Praise for the book

“Famed astronaut Aldrin combines leadership lessons with behind-the-scenes stories from his Apollo 11 moonwalk in this engaging cross between biography and self-help….Everyone, whether a student or a seasoned CEO, will find something to take away from this inspiring work.” —Publishers Weekly
Product Details

“Famed astronaut Aldrin combines leadership lessons with behind-the-scenes stories from his Apollo 11 moonwalk in this engaging cross between biography and self-help….Everyone, whether a student or a seasoned CEO, will find something to take away from this inspiring work.” —Publishers Weekly

BUZZ ALDRIN, best known for his Apollo 11 moonwalk in 1969, holds a doctorate degree in astronautics and, at the age of 84, continues to wield influence as an international advocate of space science and planetary exploration. He has written four nonfiction books, two science fact/fiction novels, and two children’s books.