COMING SOON TO OUR ONLINE CATALOG

Bound for Greatness: This Salem’s Lot Deluxe Edition is for the Serious Stephen King Connoisseur

Ask a good sommelier what wine they would choose if they could choose any vintage they wanted, and if money were no object. They would probably choose a bottle of Brunello di Montalcino,
1955, which is believed to be the finest red wine ever decanted or a Chateau d’Yquem from 1811, which serious wine scholars have deemed the finest white wine the world.

Ask a rare book collector what edition of Stephen King’s Salem’s Lot is the finest ever printed and they will tell you that would most certainly be the Centipede Deluxe Limited 2004 edition. The Deluxe Limited edition is a gorgeous black goatskin leather-bound edition featuring a black and white photograph on the book’s cover by Jerry Uelsmann, a famed artist known for his surreal, symbolic, dream-like imagery.

They will also tell you it’s a book which has the most valued amenities as well, as it features two previously unpublished but amazing short stories, “Jerusalem’s Lot” and “One for the Road,” as well as over 50 pages of captivating copy originally intended for Salem’s Lot that didn’t make it through the publisher’s deletions and an afterword by King himself that only the Pocket edition featured until now.

The book was limited to 25 printed copies marked with Roman numerals I – XV in black and I-X in red ink. Four copies were left unnumbered but were still signed by King and Uelsmann. This book is one of those four unnumbered, signed copies.

The book is printed on 100# Mohawk Superfine paper and measures 9 x 13 inches and 4 1/4 inches thick. Salem’s Lot was not an especially lengthy book, with hardback editions having around 450 pages, but with the leather binding and all its added features, the Centipede edition weighs in at over 13 pounds.

The book includes a ribbon book marker, head and tail bands, boasts three-piece cloth construction, and is housed in a supremely constructed black tray-case lined in Japanese cotton that is specifically designed to withstand thousands of removals and returns of the book to its safe home.

It total, there were 25 signed and numbered deluxe limited editions printed, 4 non-numbered editions with signatures printed, and 51 signed but not numbered copies published with all selling out very quickly. Later, 600 unsigned deluxe editions were released and sold out almost as quickly as the signed editions, making this a true collector’s dream piece.

King was extremely impressed by the illustrated folio he received in the mail before the deluxe limited went to print, exclaiming: “It’s beautiful.”

This book was published with the following production run: 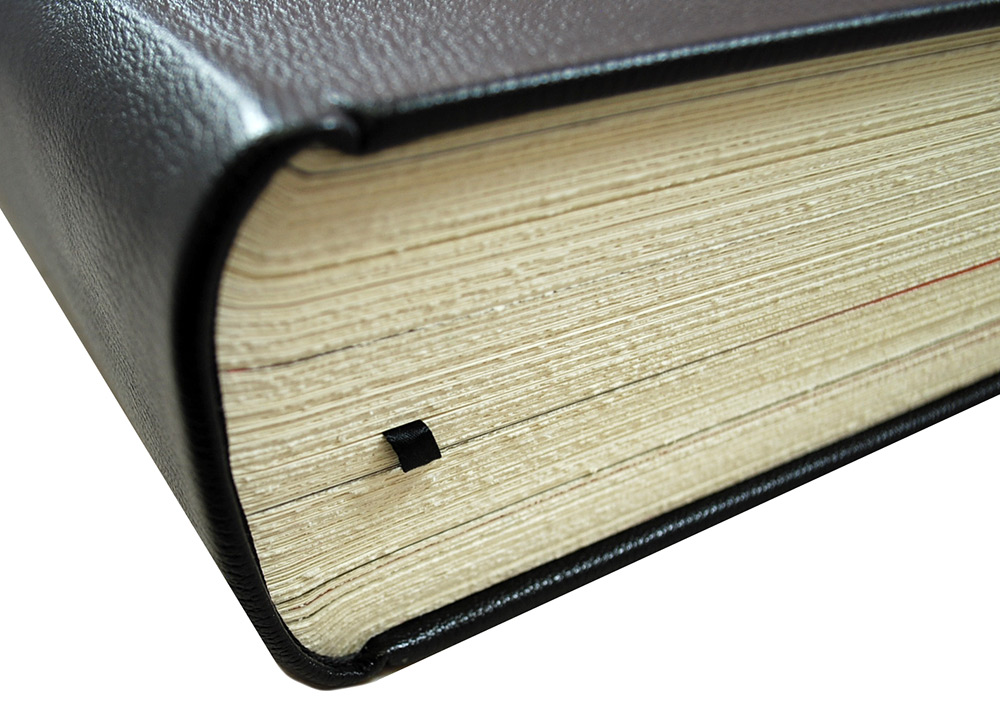 In the tray-case lined with Japanese cotton.

“Salem’s Lot” embossed on the spine of the tray-case 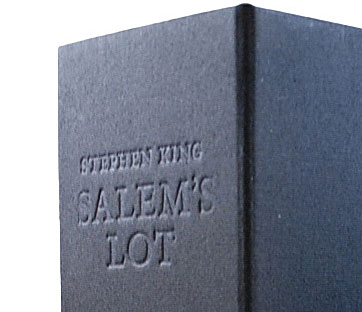 Stephen King’s second book, ‘Salem’s Lot (1975)–about the slow takeover of an insular hamlet called Jerusalem’s Lot by a vampire patterned after Bram Stoker’s Dracula–has two elements that he also uses to good effect in later novels: a small American town, usually in Maine, where people are disconnected from each other, quietly nursing their potential for evil; and a mixed bag of rational, goodhearted people, including a writer, who band together to fight that evil.

Simply taken as a contemporary vampire novel, ‘Salem’s Lot is great fun to read, and has been very influential in the horror genre. But it’s also a sly piece of social commentary. As King said in 1983, “In ‘Salem’s Lot, the thing that really scared me was not vampires, but the town in the daytime, the town that was empty, knowing that there were things in closets, that there were people tucked under beds, under the concrete pilings of all those trailers. And all the time I was writing that, the Watergate hearings were pouring out of the TV…. Howard Baker kept asking, ‘What I want to know is, what did you know and when did you know it?’ That line haunts me, it stays in my mind…. During that time I was thinking about secrets, things that have been hidden and were being dragged out into the light.”

The title King originally chose was Second Coming, but he later decided on Jerusalem’s Lot. The publishers, Doubleday, shortened it to the current title, thinking the author’s choice sounded too religious. Legacy

‘Salem’s Lot was the first of King’s books to have a huge cast of characters, a trait that would appear again in later books such as The Stand. The town of Jerusalem’s Lot would also serve as a prototype for later fictional towns of King’s writing, namely Castle Rock, Maine and Derry, Maine.

King reused the character Father Callahan, the local priest whose faith falters in the dreadful presence of Barlow, in his The Dark Tower series. He appears in Wolves of the Calla, Song of Susannah, and The Dark Tower, and provides insights into his experiences after being exiled from ‘Salem’s Lot.

Salem’s Lot was also the first novel by King in which the main character is a writer, a device he would use again in a number of novels and short stories. Mark Petrie’s chant used for repelling the vampiric Danny Glick is reused in another King novel, It. At one point, Mears explains his experience in the Marsten house, including seeing the body of the dead previous occupant. This is, obviously, impossible. However, Mears describes it as being a leftover or a remnant of what had happened there, just like the haunting of the Overlook Hotel in King’s The Shining. Salem’s Lot Prints from Centipede Press edition – These are a companion piece to the Gift Edition which did not have the interior artwork that was in the Deluxe and “Lettered” editions. Gift Edition limitation was 600 copies. I estimate that less than 100 sets of these prints were made. I have a handful of complete sets available that came directly from Centipede. There are 7 illustrations in the set, all measuring 9×13. You are unlikely to find these anywhere else than here.

Did you know that we have a membership program that will notify you of all kinds of special Stephen King items of interest that have just arrived?  So please sign up below, and we’ll welcome you, quite whole- heartedly, to our book collector’s community.