The news is out. Bestselling Harry Potter franchise authoress JK Rowling, in addition to her recent work of adult fiction, The Casual Vacancy, also tossed off a detective novel. 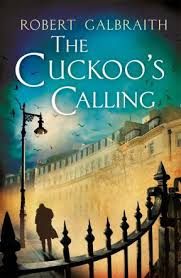 The Cuckoo’s Calling, first in what is expected to be a series of detective novels centered around a character called Cormoran Strike, was published by Mulholland Books, an imprint of Little, Brown & Co. under the pseudonym “Robert Galbraith.” It is reputed to have sold as few as 1,500 copies before the story broke and now has catapulted to the top of both the UK and the U.S. bestseller lists.

Some claim it was a publicity stunt, a way to generate more sales of the book. But then again, to publish a book under an unknown pen name already cost the publisher thousands of dollars in revenue without the hype of Rowling’s name behind it.

Turns out a “debut” detective novel written under a pseudonym was actually written by a really, really big deal.

and linked to a story detailing how the news was broken.
What is most interesting about this news is that, while The Casual Vacancy received tons of hype and very lukewarm notice, The Cuckoo’s Calling, securely under the radar, received significant praise.
Read what the critics are saying and see for yourself. Let us know what you think of Rowling’s new literary venture.

“Combines a complex and compelling sleuth and an equally well-formed and unlikely assistant with a baffling crime…A stellar debut.”(Publishers Weekly, starred review)

“Instantly absorbing, featuring a detective facing crumbling circumstances with resolve instead of clichéd self-destruction and a lovable sidekick with contagious enthusiasm for detection. Strike bears little resemblance to Jackson Brodie, but Kate Atkinson’s fans will appreciate his reliance on deduction and observation along with Galbraith’s skilled storytelling.”    (Booklist)