Rumor has it DreamWorks is currently negotiating with John Steinbeck’s estate to acquire film rights for a new adaptation of The Grapes of Wrath.

Steven Spielberg has always been a fan of John Ford, who directed the 1940 version (starring Henry Fonda) and took home the Academy Award for Best Director.  Spielberg has said that, out of deference to Ford, he will not direct the picture, just produce it.

And why not? Next year will mark the 75th anniversary of the classic novel. And with literature buzzing at the box office (see Baz Luhrmann’s The Great Gatsby, Joe Wright’s Anna Karenina, or even Cary Fukunaga’s 2011 revisitation of Jane Eyre), DreamWorks could certainly capitalize on the date to come out with a 75th Anniversary film edition.

Of course, it’s never to early to start speculating about casting. Who would you choose, for example, to pick up Henry Fonda’s torch as Tom Joad? Tell us in the comments section.

Time to Brush Up on Your Steinbeck? 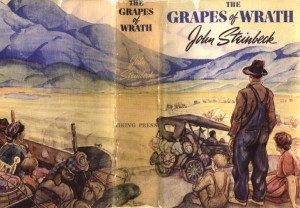 If you’ve never read The Grapes of Wrath, or haven’t done so since high school, the novel is a landmark of American literature. A portrait of the conflict between the powerful and the powerless, of one man’s fierce reaction to injustice, and of one woman’s stoical strength. The novel captures the horrors of the Great Depression and probes into the very nature of equality and justice in America. Although it follows the movement of thousands of men and women and the transformation of an entire nation, The Grapes of Wrath is also the story of one Oklahoma family, the Joads, who are driven off their homestead and forced to travel west to the promised land of California. Out of their trials and their repeated collisions against the hard realities of an America divided into Haves and Have-Nots evolves a drama that is intensely human yet majestic in its scale and moral vision, elemental yet plainspoken, tragic but ultimately stirring in its human dignity.

First published in 1939, The Grapes of Wrath summed up its era in the way that Uncle Tom’s Cabin summed up the years of slavery before the Civil War. Sensitive to fascist and communist criticism, Steinbeck insisted that “The Battle Hymn of the Republic” be printed in its entirety in the first edition of the book—which takes its title from the first verse: “He is trampling out the vintage where the grapes of wrath are stored.” At once a naturalistic epic, captivity narrative, road novel, and transcendental gospel, Steinbeck’s fictional chronicle of the Dust Bowl migration of the 1930s is perhaps the most American of American Classics.