Join Robert Olmstead, author of The Coldest Night (Algonquin, 2012), for a book signing and a conversation focusing on the genre of the war novel.

Can’t make it to the event? You can order a copy of The Coldest Night here.

About The Coldest Night: 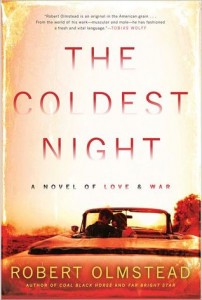 Voted Amazon.com’s Best Book of the Month in April 2013, and one of Publishers Weekly’s Best Books of the Year.

“The no-rush gait, the unadorned yet unambiguous description, the resonant alliteration . . . This is the kind of sentence that warms The Coldest Night and makes you wonder if Olmstead was meant to be a poet. But Olmstead is a novelist, and a very good one . . . It’s his depiction of war’s less monstrous aspects—the continuous repositioning of troops and reshuffling of strongholds, the ceaseless anticipation of surprise attacks, the unmitigated exhaustion—that steadily unsettles . . . These lines lend a humanity to war that descriptions of guts and gore alone cannot.”—The New York Times Book Review

Henry Childs is just seventeen when he falls into a love affair so intense it nearly destroys him. To escape the wrath of the young girl’s father, Henry joins the Marines, arriving in Korea on the eve of the brutal battle of the Chosin Reservoir—the defining moment of the Korean War. There he confronts an enemy force far beyond the scope of his imagining, but the challenges he meets upon his return home, scarred and haunted, are greater by far.

From the steamy streets of New Orleans to the bone-chilling Korean landscape, award-winning author Robert Olmstead takes us into one of the most physically challenging battles in history and, with just as much intensity, into an electrifying, all-consuming love affair.

Hulk Hogan Book Signing Event “My Life Outside the Ring”