A musical instead of a book?

When you think of how many “unoriginal” musicals have graced the Broadway stages these past few years — and not just revivals, but movie musicals and jukebox musicals and spin-off musicals (and someday maybe even video game musicals) — you probably don’t consider book musicals. Is that because there aren’t any? Matilda the Musical  probably ought not count, as it passed through a movie version before being adapted for the stage.

But thanks to John Mellencamp, Stephen King’s next mystery won’t go to hardcover, but to CD, mini-documentary, and e-book, followed by an auditorium near you!

The last thing John Mellencamp wanted to do was make a jukebox musical, another Greatest Hits parade strung together with a thinly-threaded plot. He’d been encouraged by his agent for years, but respectfully demurred — that is, until his family rented a haunted cabin and an idea came to him: Two brothers fighting over the same girl… A grisly murder… Ghostly ambiance. Why not turn the cabin’s story into a musical?

Mellencamp immediately partnered up with Stephen King to write the script.

“”Once you get to a certain age,” King says, “– I’m in my 60s now – you’ve got to try to keep expanding your field… You’ve got to try new things and if you don’t, you tend to get conservative. I always say you dig yourself a rut and then you furnish it. John asked me when we started this if I’d ever done anything like this before. I said, `John, yes, I have. I wrote a play for my Boy Scout troop when I was 11 years old. And it was a big hit with my relatives.'” 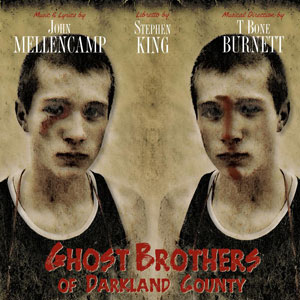 Bringing a Real-life Ghost Story to the Stage

“Ghost Brothers of Darkland County” hits the stages of Bloomington, Indiana this October. It’s not your average musical: no story exposition done through song, no cheesy orchestrations — just a stark and emotionally striking soundtrack of Americana, interspersed among properly written dramatic scenes. It is a play, with music. And producer T Bone Burnett has boasted, “It’s a very interesting group of tunes he’s put together and I do believe some of his best songs.”

The ultimate goal for “Ghost Brothers” is Broadway; though whether this unconventional piece will find a mainstage home remains unclear. For now, the CD box set (featuring Meg Ryan and Matthew McConaughey reading the dialogue and an a-list cast performing the tunes, including Sheryl Crow, Elvis Costello, Kris Kristofferson and Rosanne Cash) is available here, as is the libretto.