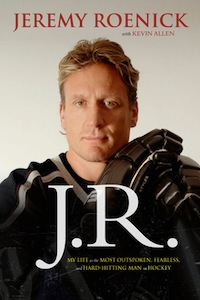 J.R.: My Life as the Most Outspoken, Fearless, and Hard-Hitting Man in Hockey
Jeremy Roenick, one of the premier hockey players of his generation and one of the greatest American stars the NHL has ever known, shares his life story in this frank and unflinching autobiography. After making his debut as an 18-year-old with the Chicago Blackhawks, Roenick thrilled fans with his flashy style, take-no-prisoners approach, and jaw-dropping skills. A native of Boston, Roenick went on to play for four more franchises—including the Philadelphia Flyers and Los Angeles Kings—during his incredible 18-season career. By the time he was through, Roenick had racked up 513 goals—the second most of any American-born player—and 703 assists. Now a tells-it-like-it-is commentator for NBC and the NHL, Roenick takes readers on a behind-the-scenes, warts-and-all tour through his illustrious career, both on and off the ice.

Jeremy Roenick is a member of the U.S. Hockey Hall of Fame and one of only four American-born players to score 500 or more career NHL goals. He is currently a hockey analyst for NBC. Kevin Allen is the author or coauthor of more than a dozen sports books, including Brett: His Own Story, Star-Spangled Hockey: Celebrating 75 Years of USA Hockey, and Without Fear: Hockey’s 50 Greatest Goaltenders. He lives in Ypsilanti, Michigan.