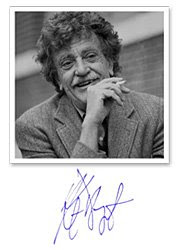 In 1998, Easton Press published a signed limited edition of this highly popular and influential novel by Vonnegut. This was an elegant leather-bound collector’s edition, personally hand signed by now the late Mr. Vonnegut on a special dedication page. This particular book was limited to only 1200 signed and numbered copies. It included a Certificate of Authenticity to guarantee the signature, and collector notes about the title.

The contents of this book are studied in universities around the world. Slaughterhous-Five is one of the world’s great anti-war books. Centering on the infamous fire-bombing of Dresden, Billy Pilgrim’s odyssey through time reflects the mythic journey of our own fractured lives as we search for meaning in what we are afraid to know.


If you’re looking to add this luxurious masterpiece to your collection,
we still have a few copies available.

Slaughterhouse-Five (taken from the name of the building where the POWs were held) is not only Vonnegut’s most powerful book, it is also as important as any written since 1945. Like Catch-22, it fashions the author’s experiences in the Second World War into an eloquent and deeply funny plea against butchery in the service of authority. Slaughterhouse-Five boasts the same imagination, humanity, and gleeful appreciation of the absurd found in Vonnegut’s other works, but the book’s basis in rock-hard, tragic fact gives it unique poignancy — and humor.

Slaughterhouse Five is Vonnegut’s most powerful book and also as important as any written since 1945.

Don’t let the ease of reading fool you–Vonnegut’s isn’t a conventional, or simple, novel. He writes, “There are almost no characters in this story, and almost no dramatic confrontations, because most of the people in it are so sick, and so much the listless playthings of enormous forces. One of the main effects of war, after all, is that people are discouraged from being characters…” Kurt Vonnegut’s absurdist classic Slaughterhouse-Five introduces us to Billy Pilgrim, a man who becomes ‘unstuck in time’ after he is abducted by aliens from the planet Tralfamadore. In a plot-scrambling display of virtuosity, we follow Pilgrim simultaneously through all phases of his life, concentrating on his (and Vonnegut’s) shattering experience as an American prisoner of war who witnesses the firebombing of Dresden.

This particular book included all the classic Easton Press qualities:

Kurt Vonnegut was a master of contemporary American literature. His black humor, satiric voice, and incomparable imagination first captured America’s attention in The Sirens of Titan in 1959 and established him as “a true artist” with Cat’s Cradle in 1963. He was, as Graham Greene declared, “one of the best living American writers.” Mr. Vonnegut passed away in April 2007.

Kurt Vonnegut, Jr. (November 11, 1922 – April 11, 2007) was a prolific and genre-bending American author. The novelist is known for works blending satire, black comedy and science fiction, such as Slaughterhouse-Five (1969), Cat’s Cradle (1963), and Breakfast of Champions (1973). He is also known for his humanist beliefs and being honorary president of the American Humanist Association.

Vonnegut’s first short story, “Report on the Barnhouse Effect” appeared in the February 11, 1950 edition of Collier’s (it has since been reprinted in his short story collection, Welcome to the Monkey House). His first novel was the dystopian novel Player Piano (1952), in which human workers have been largely replaced by machines. He continued to write short stories before his second novel, The Sirens of Titan, was published in 1959. Through the 1960s, the form of his work changed, from the relatively orthodox structure of Cat’s Cradle (which in 1971 earned him a Master’s Degree) to the acclaimed, semi-autobiographical Slaughterhouse-Five, given a more experimental structure by using time travel as a plot device.

These structural experiments were continued in Breakfast of Champions (1973), which included many rough illustrations, lengthy non-sequiturs and an appearance by the author himself, as a deus ex machina.

Vonnegut attempted suicide in 1984 and later wrote about this in several essays.[27]

Breakfast of Champions became one of his best-selling novels. It includes, in addition to the author himself, several of Vonnegut’s recurring characters. One of them, science fiction author Kilgore Trout, plays a major role and interacts with the author’s character.

In addition to recurring characters, there are also recurring themes and ideas. One of them is ice-nine (a central wampeter in his novel Cat’s Cradle), said to be a new form of ice with a different crystal structure from normal ice. When a crystal of ice-nine is brought into contact with liquid water, it becomes a seed crystal that “teaches” the molecules of liquid water to arrange themselves into ice-nine. This process is not easily reversible, however, as the melting point of ice-nine is 114.4 degrees Fahrenheit (45.8 degrees Celsius).

Although many of his novels involved science fiction themes, they were widely read and reviewed outside the field, not least due to their anti-authoritarianism. For example, his seminal short story Harrison Bergeron graphically demonstrates how an ethos like egalitarianism, when combined with too much authority, engenders horrific repression.

In much of his work, Vonnegut’s own voice is apparent, often filtered through the character of science fiction author Kilgore Trout (whose name is based on that of real-life science fiction writer Theodore Sturgeon), characterized by wild leaps of imagination and a deep cynicism, tempered by humanism. In the foreword to Breakfast of Champions, Vonnegut wrote that as a child, he saw men with locomotor ataxia, and it struck him that these men walked like broken machines; it followed that healthy people were working machines, suggesting that humans are helpless prisoners of determinism. Vonnegut also explored this theme in Slaughterhouse-Five, in which protagonist Billy Pilgrim “has come unstuck in time” and has so little control over his own life that he cannot even predict which part of it he will be living through from minute to minute. Vonnegut’s well-known phrase “So it goes”, used ironically in reference to death, also originated in Slaughterhouse-Five and became a slogan for anti-Vietnam War protestors in the 1960s. “Its combination of simplicity, irony, and rue is very much in the Vonnegut vein.”

With the publication of his novel Timequake in 1997, Vonnegut announced his retirement from writing fiction. He continued to write for the magazine In These Times, where he was a senior editor, until his death in 2007, focusing on subjects ranging from contemporary U.S. politics to simple observational pieces on topics such as a trip to the post office. In 2005, many of his essays were collected in a new bestselling book titled A Man Without a Country, which he insisted would be his last contribution to letters.

He has stalled finishing his highly anticipated novel If God Were Alive Today—or so he claims. “I’ve given up on it … It won’t happen. … The Army kept me on because I could type, so I was typing other people’s discharges and stuff. And my feeling was, ‘Please, I’ve done everything I was supposed to do. Can I go home now?’ That’s what I feel right now. I’ve written books. Lots of them. Please, I’ve done everything I’m supposed to do. Can I go home now?”

The April 2008 issue of Playboy featured the first published excerpt from Armageddon in Retrospect, the first posthumous collection of Vonnegut’s work. The book itself was published in the same month. It included never before published short stories by the writer and a letter that was written to his family during WWII when Vonnegut was captured as a prisoner of war. The book also contains drawings that Vonnegut himself drew and a speech he wrote shortly before his death. The introduction of the book was written by his son, Mark Vonnegut.

* Penelope (1960) – revised as Happy Birthday, Wanda June in 1970
* Fortitude (1968) – a one-act, collected in Human-Machines: An Anthology of Stories About Cyborgs, New York: Vintage, 1975.
* Between Time and Timbuktu; or, Prometheus-5: a Space Fantasy (1972) – National Educational Television Network. Based on materials by Kurt Vonnegut, Jr. Designed by Joel Schick with photos. by Jill Krementz and from the NET playhouse production.
* Requiem (1987) – music by Edgar David Grana
* Make Up Your Mind (1993)
* Miss Temptation (1993) – adapted by David Cooperman
* L’Histoire du Soldat (1993) – an adaptation

In 2004, Vonnegut participated in the project The Greatest Album Covers That Never Were, where he created an album cover for Phish called Hook, Line and Sinker, which has been included in a traveling exhibition for the Rock and Roll Hall of Fame.