A signed first edition of Vonnegut’s most important work, Slaughterhouse-Five, has sold recently for $7,500. Vonnegut was a prolific, genre-bending author and demand for signed editions of his works will probably not decrease.  Slaughterhouse-Five is the great anti-war science fiction novel dealing with the World War II experiences and journeys through time of a soldier called Billy Pilgrim.
If you’re a collector of Vonnegut works, more affordable signed books are still available. These are the luxurious leather bound editions published by Easton Press. Although not as valuable as the true first printings, they still make an elegant addition to any home or office.

In 2004, Vonnegut participated in the project The Greatest Album Covers That Never Were, for which he created an album cover for Phish called Hook, Line and Sinker, which has been included in a traveling exhibition for the Rock and Roll Hall of Fame. 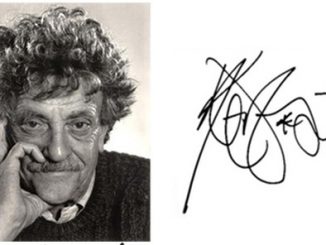