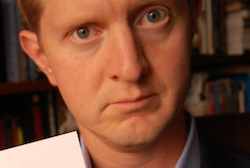 Author Ken Jennings will speak and sign his new book, Because I Said So!

All books signed at Book Revue events must be purchased at Book Revue. If you purchase the book prior to the event please save your receipt. If you have purchased the book from somewhere else you can still get your book signed, as long as you make a purchase in Book Revue store of equal or greater value to that of the book.

Ken Jennings broke game show records in 2004 with his unprecedented seventy-four game, $2.52 million victory streak on Jeopardy!. Jennings’s book Brainiac, about his Jeopardy! adventures, was a critically acclaimed New York Times bestseller, as was his follow-up, Maphead. He is also the author of Ken Jennings’s Trivia Almanac.

Don’t cross your eyes or they’ll stay like that!
Feed a cold, starve a fever!
Don’t touch your Halloween candy until we get it checked out!
Don’t look in the microwave while it’s running!

Is any of it true? If so, how true? Ken Jennings wants to find out if mother and father always know best. Yes, all those years you were told not to sit too close to the television (you’ll hurt your eyes!) or swallow your gum (it stays in your stomach for seven years!) or crack your knuckles (arthritis!) are called into question by our country’s leading trivia guru. Jennings separates myth from fact to debunk a wide variety of parental edicts. Armed with medical case histories, scientific findings, and even the occasional experiment on himself (or his kids), Jennings exposes countless examples of parental wisdom run amok. Whether you’re a parent who wants to know what you can stop worrying about or a kid (of any age) looking to say, “I told you so,” this is the anti–helicopter parenting book you’ve been waiting for. 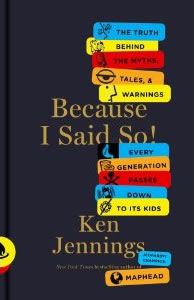