Did you ever wonder what could be the most valuable item in the Stephen King collector’s marketplace today? If you guessed a first edition Salem’s Lot with the original first issue dust-jacket, then you are correct. In a recent article from finebooksmagazine, such an extraordinary example was sold for over $100,000.

So what makes this so valuable? It has to do with the dust-jacket. In 1975, Doubleday made a last minute modification in the price from $8.95 to $7.95.  All the dust-jackets were price-clipped with a new price of $7.95 printed on the flap. This First State dust-jacket became the most desirable and only a few survived. The front flap of this dust-jacket has the unclipped price of $8.95 in the top right corner and the text below on the flap refers to “Father Cody” instead of “Father Callahan” as found in later states/editions.

There were only 20,000 First Edition copies of Salem’s Lot produced by Doubleday.

This particular book and dust-jacket originated from the same library that is currently offered on consignment here.

If you are serious Stephen King collector, you now have a unique opportunity. Imagine owning  not one, but two of these first edition Salem’s Lot with original first issue dust-jackets, valued at over $200,000. Keep reading for more details. 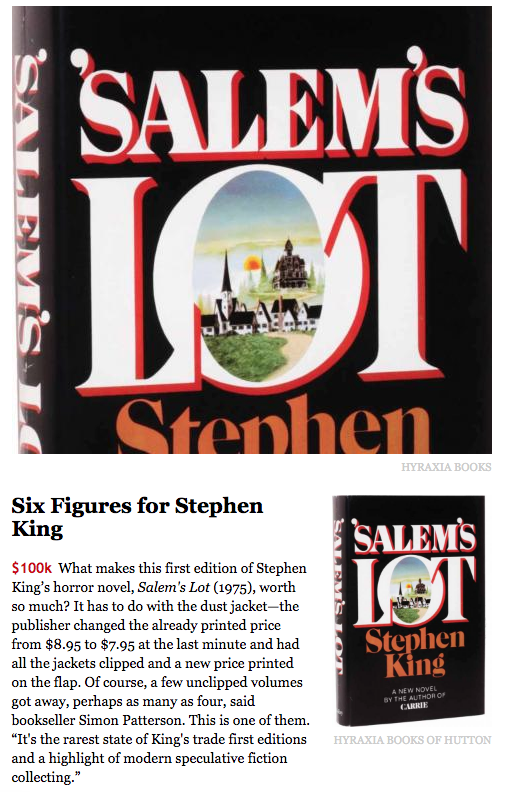 The Ultimate Stephen King Library for the Advanced Collector

We are pleased to represent a collector who is offering to sell his entire Stephen King library comprising of upwards of 600 volumes. It has been assembled meticulously over a few decades, each volume carefully selected to be in Fine to Very Fine condition, the highest possible grade and quality.

The majority of signed limited edition and signed lettered editions are included with this collection, along with other special items that very few have , if any.

Click here to view many photos of this consigned Stephen King library  and how to be one of the few collectors in the world to own such a remarkable collection of items.