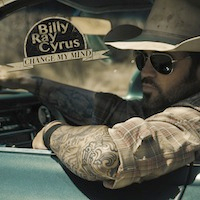 It isn’t every day that a person receives a letter of support from his hero, but it happened to Billy Ray Cyrus. It was June 1992, and the singer, songwriter, and guitarist had just struck it big with his debut album, the eventual 9x-platinum-selling No. 1 Some Gave All, fueled by the best-selling but critically drubbed single “Achy Breaky Heart,” which spent five weeks atop the Billboard Country chart. Amid dodging slings and arrows from the press, Cyrus received a letter of support from Johnny Cash, who wrote: “Thirty-six years ago I was working with Elvis and saw him take the same kind of flak you’re taking now. Congratulations on the way you’re handling it all. In your case, as in Elvis’, the good outweighs the bad. Let ’em have it. I’m in your corner.”

Before Some Gave All (which held the No. 1 spot on the Billboard Top 200 chart for 17 weeks in a row and became the best-selling debut album of all time by a male solo artist), Cyrus was living in his Chevy Beretta, having spent the previous decade chasing music stardom until Harold Shedd at Mercury Nashville Records offered him a record deal in 1990. “Everything was going crazy, so you can imagine what a letter from Johnny Cash meant to me at the time,” Cyrus recalls. “I thought, ‘If Johnny Cash says he’s in my corner, then I guess everything’s going to be all right.’ Nothing else mattered.”

Perhaps Cash recognized a kindred rebel spirit in the Southern-born Cyrus, who went on to enjoy a 20-year-career in the spotlight during which he has sold millions of albums worldwide, charted nearly 30 singles (including three No. 1 country hits), and racked up multiple film and television credits. The Kentucky native has come a long way since spending Saturday nights at his Papaw Casto’s house by the railroad tracks listening to him play fiddle while his mother played piano and his father played guitar. “We’d sing old standards like ‘(Won’t You Come Home) Bill Bailey’ and bluegrass, Southern gospel kind of stuff,” Cyrus says of his childhood. “The night would turn over into Sunday morning and I’d go to my other grandfather’s church. He was a Pentecostal preacher, and my dad would call me up to sing ‘Swing Low, Sweet Chariot’ with his gospel group the Crownsmen Quartet. That music is in my blood, and that’s what I wanted to capture on this new album Change My Mind.”

Recorded in Los Angeles over three months with producer Brandon Friesen, Change My Mind finds Cyrus coming full circle musically. Having attended college on a baseball scholarship before buying a guitar at age 20 made him question his career path, Cyrus started a band called Sly Dog, and for years made his living performing in the smoky bars of the Ohio River Valley. Change My Mind has that loose, honky-tonk feel of bar band music, but is performed by a group of world-class musicians, including in-demand session drummer Kenny Aronoff, bassist Dusty Wakeman, and guitarists Leroy Powell, John West, Dominic Cifarelli, and Nelson Blanton.

“Once Kenny was locked in, Brandon and I knew the train was on the right track,” Cyrus says. “We started bringing in guitar players with different influences that really covered the spectrum of everything I’ve ever listened to including early bluegrass, like Earl Scruggs and Bill Monroe. We built this really solid rock and roll band, but when I started listening to the tracks I realized, ‘Oh, man. I’ve definitely got the rock and roll side covered, but what about the other part of my roots?’ That’s when we added banjo player Tony Furtado and fiddler Luke Price. They kind of work as a team and have been playing with Alison Krauss for years. Once we did that, we knew the band was complete. It became the perfect mesh of everything I wanted to create sound-wise with Kenny holding down the bottom end on those drums.”

The album’s highlights include the country-rock title track, which Cyrus says features “a little piece of every style of music I love,” the lean and mean “Hillbilly Heart,” and “Once Again,” which finds Cyrus channeling such rock influences as Led Zeppelin and Pink Floyd. There’s also an update of Some Gave All’s “I’m So Miserable,” which is given a smoky twist and a blistering guitar solo that pays homage to one of Cyrus’ all-time favorites, Stevie Ray Vaughan.

Change My Mind also showcases Cyrus’ smoldering, swaggering voice, as well as his unforgettable melodies and candid lyrics that offer up a window into his colorful life. “My songs come to me when I’m dealing with heavy stuff,” he says. “If I’m going through something emotional, the songs pour out of me. It’s the only way I know how to express myself. I have lived through every emotion on every one of these songs. There has been so much chaos around my world over the past few years. I’d just write it all down and tell myself, ‘Lean into the music.’”

The result is a series of heartfelt tracks, including “That’s What Daddys Do” — a tender ballad about fatherhood that Cyrus wrote during what he calls the storm of his life. “I was separated from my wife and my kids and looking at our worlds being torn apart. I said to myself, ‘You know what Cyrus? You’re the dad. You’ve got to go put your family back together. That’s what daddies do.’ And the song came to me.” “Hope Is Just Ahead” was written the day after and inspired by the Columbine High School shootings in 1999, but Cyrus feels the events resonate with what’s going on in the world today. Then there’s “Tomorrow Became Yesterday,” which Cyrus says is the most personal song on Change My Mind. “When I was a young boy my dad would say, ‘Don’t worry about stuff beyond your control, because one day you’ll look in the mirror and be an old man and your life will have passed you by.’ Unfortunately I did worry my whole life, and I remember that moment when I realized, ‘My dad was right.’” (Cyrus has been thinking a lot about his life story lately while completing his autobiography, entitled Hillbilly Heart, which will be released by Amazon in April 2013.)

The lyrical honesty, Cyrus says, was born out of the complete freedom he had in making Change My Mind, which will be released on October 23rd by Blue Cadillac Music, the independent label Cyrus has launched with Friesen. “I was able to make a record with 100 percent creative control: no rules, no limits, and without trying to fit anyone’s preconceived notions,” he says. “That in itself was sweet. It’s the reason I started a band all those years ago, because I thought music was supposed to be an artistic and true reflection of who you are.”

Now, fresh off the 20-year anniversary of Some Gave All, Cyrus is ready to unleash the album of his life, Change My Mind, which has made him recall some valuable advice that his friend, rock and roll pioneer Carl Perkins, gave him back in the day. “Carl said, ‘Hoss, just do what you do. Make your music, don’t be following anyone who says you have to sound like everyone else. That’s the main thing: Be original.’ Waylon Jennings and Johnny Cash told me the same thing. All these years and all this turbulence later, I’m glad I listened.”