Best known for his dystopian novel Fahrenheit 451 and The Martian Chronicles, Bradbury is widely considered one of the greatest and most popular American writers of speculative fiction of the twentieth century.

Ray Bradbury’s popularity has been increased by more than 20 television shows and films using his writings (see Adaptations of his work).

“Bloodlines” Lettered “SS” – One of only 52 copies ever produced.

PERSONALLY HAND SIGNED BY RICHARD MATHESON, RAY BRADBURY, JOHN CARPENTER, and those who write appreciation for this book.

Presented in a beautiful hinged redwood coffin. This is the high profile release of 2006. An omnibus collection of Matheson’s vampire tales and scripts. 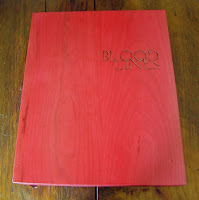 Bradbury was born in Waukegan, Illinois, to a Swedish immigrant mother and a father who was a power and telephone lineman. His paternal grandfather and great-grandfather were newspaper publishers.

Bradbury was a reader and writer throughout his youth, spending much time in the Carnegie Library in Waukegan. He used this library as a setting for much of his novel Something Wicked This Way Comes, and depicted Waukegan as “Green Town” in some of his other semi-autobiographical novels — Dandelion Wine, Farewell Summer — as well as in many of his short stories.

He attributes his lifelong habit of writing every day to an incident in 1932 when a carnival entertainer, Mr. Electrico, touched him with an electrified sword, made his hair stand on end, and shouted, “Live forever!”

The Bradbury family lived in Tucson, Arizona, in 1926–27 and 1932–33 as his father pursued employment, each time returning to Waukegan, but eventually settled in Los Angeles in 1934, when Ray was thirteen.

Bradbury graduated from the Los Angeles High School in 1938 but chose not to attend college. Instead, he sold newspapers at the corner of South Norton Avenue and Olympic Boulevard. He continued to educate himself at the local library, and having been influenced by science fiction heroes like Flash Gordon and Buck Rogers, he began to publish science fiction stories in fanzines in 1938. Ray was invited by Forrest J Ackerman to attend the now legendary Clifton’s Cafeteria Science Fiction Club. This was where Ray met the writers Robert A. Heinlein, Emil Petaja, Fredric Brown, Henry Kuttner, Leigh Brackett, and Jack Williamson. Launching his own fanzine in 1939, titled Futuria Fantasia, he wrote most of its four issues, each limited to under a hundred copies. Bradbury’s first paid piece was for the pulp magazine Super Science Stories in 1941, for which he earned $15.  He became a full-time writer by the end of 1942. His first book, Dark Carnival, a collection of short works, was published in 1947 by Arkham House, a firm owned by writer August Derleth.

A chance encounter in a Los Angeles bookstore with the British expatriate writer Christopher Isherwood gave Bradbury the opportunity to put The Martian Chronicles into the hands of a respected critic. Isherwood’s glowing review followed and substantially boosted Bradbury’s career.

Although he is often described as a science fiction writer, Bradbury does not box himself into a particular narrative categorization:

On another occasion, Bradbury observed that the novel touches on the alienation of people by media:

In writing the short novel Fahrenheit 451 I thought I was describing a world that might evolve in four or five decades. But only a few weeks ago, in Beverly Hills one night, a husband and wife passed me, walking their dog. I stood staring after them, absolutely stunned. The woman held in one hand a small cigarette-package-sized radio, its antenna quivering. From this sprang tiny copper wires which ended in a dainty cone plugged into her right ear. There she was, oblivious to man and dog, listening to far winds and whispers and soap-opera cries, sleep-walking, helped up and down curbs by a husband who might just as well not have been there. This was not fiction.

Besides his fiction work, Bradbury has written many short essays on the arts and culture, attracting the attention of critics in this field. Bradbury was a consultant for the American Pavilion at the 1964 New York World’s Fair and the original exhibit housed in Epcot’s Spaceship Earth geosphere at Walt Disney World.

Bradbury was a close friend of Charles Addams and collaborated with him on the creation of the macabre “Family” enjoyed by New Yorker readers for many years and later popularized as The Addams Family. Bradbury called them the Elliotts and placed them in rural Illinois. His first story about them was “Homecoming,” published in the New Yorker Halloween issue for 1946, with Addams illustrations. He and Addams planned a larger collaborative work that would tell the family’s complete history, but it never materialized. In October 2001, Bradbury published all the Family stories he had written in one book with a connecting narrative, From the Dust Returned, featuring a wraparound Addams cover.

Bradbury was a friend of Charles Addams and they did collaborate, but in a 2001 interview Bradbury clearly states that they went their own separate ways, with Bradbury creating the Elliott Family and Addams creating the Addams family.