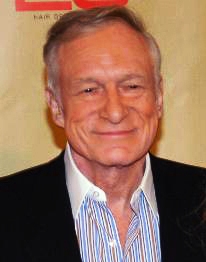 Hefner married Northwestern University student Mildred Williams in 1949. They had two children, Christie and David (born August 30, 1955). [3] Before the wedding, Mildred confessed that she had had an affair while he was away in the Army; he called the admission “the most devastating moment of my life.” A 2006 E! True Hollywood Story profile of Hefner revealed that Mildred allowed him to sleep with other women, out of guilt for her infidelity and in the hopes that it would preserve their marriage. They divorced in 1959.

Hefner remade himself as a sophisticated bon vivant and man about town, a lifestyle he promoted in his magazine and two TV shows he hosted, Playboy’s Penthouse (1959-1960) and Playboy After Dark (1969-1970). He admitted to being “‘involved’ with maybe eleven out of twelve months worth of Playmates” during these years. [4] Donna Michelle, Marilyn Cole, Lillian Müller, Patti McGuire, Shannon Tweed, Brande Roderick, Barbi Benton, Karen Christy, Sondra Theodore, and Carrie Leigh – who filed a $35 million alimony suit against him – were a few of his many conquests. In 1971, he acknowledged that he experimented in bisexuality.

In 1989, he married Playmate of the Year Kimberley Conrad, and had two sons, Marston (born April 9, 1990), Cooper (born September 4, 1991). The E! True Hollywood Story profile noted how the notorious Playboy Mansion had been transformed into a family-friendly homestead. However, after he separated from Conrad in 1999 (they have yet to divorce), Hefner began to move an ever-changing coterie of very young women into the Mansion, dating up to seven girls at once; among them, Brande Roderick, Izabella St. James, Tina Marie Jordan, Holly Madison, Bridget Marquardt, and Kendra Wilkinson. The reality television series The Girls Next Door depicted the lives of Madison, Marquardt, and Wilkinson at the Playboy Mansion. In 2008, Madison left Hefner. He currently dates Marquardt, and 19 year old identical twin models Karissa and Kristina Shannon,[6] who were arrested in January 2008 for battery.[7]

Hefner has espoused a liberal/libertarian stance. On June 4, 1963, he was arrested for selling obscene literature after an issue of Playboy featuring nude shots of Jayne Mansfield was released. A jury was unable to reach a verdict.

His former secretary, Bobbie Arnstein, was found dead in a Chicago hotel room after an overdose of drugs in January 1975. Hefner called a press conference to allege that she had been driven to suicide by narcotics agents and federal officers. Hefner further claimed the Government was out to get him because of Playboy’s philosophy and its advocacy of more liberal drug laws.[opinion needs balancing]

The Hugh Hefner First Amendment Award was created by Christie Hefner “to honor individuals who have made significant contributions in the vital effort to protect and enhance First Amendment rights for Americans.” He has donated and raised money for the Democratic Party. [8]

Hefner donated $100,000 to the University of Southern California’s School of Cinematic Arts to create a course called “Censorship in Cinema”, and $2 million to endow a Chair for the study of American film. [9]

The Age reported in October 2008 that Hefner is selling tickets to his famous, celebrity-filled parties for the first-time ever to offset cash-flow problems due to setbacks Playboy Enterprises has suffered, including decreasing Playboy circulation, decreasing stock value, and ventures that have yet to turn a profit. [10] Christie Hefner released a memo to employees about her efforts to streamline the company’s operations, including eliminating its DVD division and laying off staff. [11]. On December 8, 2008, Christie Hefner announced she was resigning from Playboy Enterprises, effective January 2009.