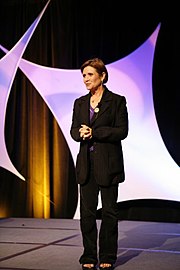 Carrie Frances Fisher (born October 21, 1956) is an American actress, screenwriter and novelist. She is most famous for her portrayal of Princess Leia in the original Star Wars trilogy.

Soon after, Fisher enrolled at London’s Central School of Speech and Drama, which she attended for 18 months. She made her film debut in the Columbia comedy Shampoo (1975) starring Warren Beatty, Julie Christie and Goldie Hawn, with Lee Grant and Jack Warden. In 1977, Fisher starred as Princess Leia Organa in George Lucas’ sci-fi film Star Wars opposite Mark Hamill and Harrison Ford, a part she claims to have obtained by sleeping “with some nerd”. [2]

The huge success of Star Wars made her internationally famous. The character of Princess Leia became a merchandising triumph; there were small plastic action figures of the Princess in toy stores across the United States. She appeared as Princess Leia in the 1978 made-for-TV movie, The Star Wars Holiday Special. Fisher hosted the Saturday Night Live episode that included the second performance by Dan Aykroyd and John Belushi as their popular Blues Brothers characters.

Fisher appeared in the music video for Ringo Starr’s cover of “You’re Sixteen” as the love interest in 1978 on Ringo’s TV special of that year.[3][4]

Fisher later appeared in The Blues Brothers movie in a cameo role as Joliet Jake’s vengeful ex-lover, listed in the credits as “Mystery Woman.” She appeared on Broadway in Censored Scenes From King Kong in 1980. That year, she appeared again as Princess Leia in Star Wars Episode V: The Empire Strikes Back. She made her third and final appearance as Leia in the series in Star Wars Episode VI: Return of the Jedi. After her appearance wearing a golden metal bikini, or slave girl outfit, that almost immediately rose to pop culture icon status, Fisher became a sex symbol for a short period. She is one of the few actors or actresses to star in movies with both John and Jim Belushi, later appearing with the latter in the movie The Man with One Red Shoe. She also was a replacement in the Broadway production of Agnes of God (1982). She appeared in the Woody Allen film Hannah and her Sisters in 1986.

In 1987, Fisher published her first novel, Postcards from the Edge. The book was semi-autobiographical in the sense that she fictionalized and satirized real life events such as her drug addiction of the late 1970s.[5] It became a bestseller, and she received the Los Angeles Pen Award for Best First Novel. In 1989 Fisher played a major supporting role in When Harry Met Sally, and in the same year she played opposite Tom Hanks as his wife in The Burbs.

In 1990, Columbia Pictures released a movie version of Postcards from the Edge, adapted for the screen by Fisher and starring Meryl Streep, Shirley MacLaine, and Dennis Quaid. She also appeared in the movie Drop Dead Fred in 1991. In 1997, Fisher appeared as a therapist in Austin Powers: International Man of Mystery. During the 1990s Fisher also published the novels Surrender the Pink (1991) and Delusions of Grandma (1993).

In the movie Scream 3 (2000), Fisher played an actress mistaken for Carrie Fisher. (“Yeah, I was up for the part of Princess Leia. But who gets it? The girl who slept with George Lucas!”) Director’s commentary on the Scream 3 DVD suggests that the sequence was in fact penned by Fisher herself. In 2001, Fisher played a nun in Jay and Silent Bob Strike Back.

She also co-wrote the TV comedy movie These Old Broads (2001), of which she was also co-executive producer. It starred her mother, Debbie Reynolds, as well as Elizabeth Taylor, Joan Collins and Shirley MacLaine. In this, Taylor’s character, an agent, explains to Reynolds’ character, an actress, that she was in an alcoholic blackout when she married the actress’s husband, “Freddy.”

Besides acting and writing original works, Fisher was one of the top script doctors in Hollywood, working on the screenplays of other writers.[6][7] She has done uncredited polishes on movies starting with The Wedding Singer and Sister Act,[6] and was hired by the creator of Star Wars, George Lucas, to polish scripts for his 1992 TV series The Young Indiana Jones Chronicles. [6] Her expertise in this area was why she was chosen as one of the interviewers for the screenwriting documentary Dreams on Spec in 2007. Though during an interview in 2004 she said that she no longer does much script doctoring.[7]

Fisher also plays Peter Griffin’s boss on the animated sitcom Family Guy and appeared in a book of photographs titled Hollywood Moms (2001) for which she wrote the introduction. Fisher published a Suzanne Vale sequel novel, The Best Awful There Is in 2004.

Fisher wrote and performed in her one-woman play “Wishful Drinking” at the Geffen Playhouse in Los Angeles from November 7, 2006, to January 14, 2007.[8] Her show played at the Berkeley Repertory Theater through April, 2008.[9] “Wishful Drinking” played at Hartford Stage in August 2008 [10] before moving on to the Arena Stage in Washington, DC in September 2008 and Boston[11] in October 2008.

In 2007 she was a full-time judge on FOX’s filmmaking-competition reality TV series On the Lot.

Fisher recently joined Turner Classic Movies host Robert Osborne on Saturday evenings for The Essentials with informative and entertaining conversation on Hollywood’s best films. She guest-starred in the episode titled “Sex and Another City” from season 3 of Sex and the City with Sarah Jessica Parker. This episode also featured Vince Vaughn, Hugh Hefner and Sam Seder in a guest role. On October 25, 2007, Fisher guest-starred on 30 Rock for the “Rosemary’s Baby” Episode 4 of Season 2 for which she received an Emmy Award nomination. She starred as Rosemary Howard. Her last line in the show was a spoof from Star Wars: “Help me Liz Lemon, You’re my only hope!”. On April 28, 2008, she was a guest on Deal or No Deal.